4/5/2021:  Temps today were around 79 degrees!  Only a few piles of snow left in the woods and on shaded trails- some vernal pools still have ice on them, but for the most part the snow is gone!  Tonight we had a really great thunderstorm- lots of lighting and some much needed rain - lots of small fires around the state this week due to really dry conditions.

4/4/21: Wood frogs are out singing- river otters are mating and song sparrows are singing!

3/25/21: First robins at the Center, a nice flock of them!  Also, dark-eyed junco and red wing blackbirds are reported in the area. 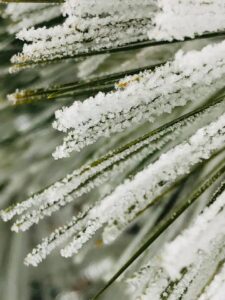 3/23/21: More woodcock reports and chipmunks are out and about!

3/22/21: First ruffed grouse drumming of the season, someone also mentioned hearing a woodcock peenting this past weekend!

3/19/21: Second boil of sap in progress!  90+ gallons collected this past week!  Also mourning cloak butterflies and ticks are out.  At Powell marsh sandhill cranes and a harrier were seen!

3/18/21: Canada geese, mallards, common mergansers and trumpeter swans have been seen around in open water!

3/17/21: Still piles of snow around the parking area, and in the woods- paths and snowmobile trails are clear of snow.

2/28/21:  We haven't had a wonderful snow year like we did last year, but today we received 10 inches of fresh snow! Warmer temps coming up will quickly melt the snow we have- so enjoying it while we can!

1/2&3/21: We started the new year with a really neat meteorological event known as "rime ice." This is different from hoar-frost in that for rime ice forms as fog settles over the landscape when the temps are below freezing- super cooled water droplets (water that is below freezing but still liquid) in the fog attach to any object it hits and forms a beautiful furry or spikey ice on the object. Hoar frost is formed when water vapor in the air goes straight from vapor to a solid on objects, skipping the liquid phase- this occurs on clean nights with a light wind. We had fog warnings both nights, creating rime ice vs hoar-frost.

PDFs, will open in new tab

Please be sure to type "Capital Campaign" into the text box on the next page when making your donation. This ensures that your donation is applied to the building campaign.

14006 Discovery Lane in Manitowish Waters, about one mile north of the intersection of Highway 51 and County W, across from Rest Lake Park.

Challenge yourself and explore our 20km of trails, ready for mountain biking, hiking and cross-country skiing.