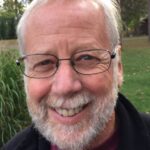 In the fall of 1995, a small three-inch classified ad in the Lakeland Times caught the eye of several members of the local community, as well as staff at the North Lakeland Elementary School: For rent, former Youth Conservation Corps Camp at Statehouse Lake in Manitowish Waters. Contact WI-DNR.

I and many others knew a little bit about what had gone on there - it was the place where teen-aged campers came to work their butts off on civic projects like building trails and bridges and planting trees. We were all familiar with the property - it was right across from Skeeter Beach and Rest Lake Park. Statehouse Lake and the cross country ski trail named for it ran right through the property. Here was this huge gem of a natural area about two minutes from downtown Manitowish Waters that so deserved to be preserved as a community asset. We had to put in a proposal.

We formed a steering committee of community and school members. School staff wanted to use it for outdoor education. Community members had about 8 million ideas. After many meetings amongst ourselves and with Sue Treb, the school's administrator, we came up with this basic agreement: the school would make the lease proposal in its name and the community members promised that whatever happened at Statehouse Lake would be self-sustaining - it would never cost the school a dime.

Based on North Lakeland's excellent reputation and the DNR's confidence that we would be educating people about nature and that we would responsibly steward the property - and the fact that we were the only group that put in a proposal - we were awarded a 15 year lease. The rent was $1/year plus 1 1/2% of our gross sales.

We had a name from Bob Kovar, one of our first visionaries: the North Lakeland Environmental Awareness Center. We had the steering committee but not yet a formal Board. After much discussion, in the spring of 1996 we incorporated as the North Lakeland Discovery Center and established a mission statement: to explore the area's natural, cultural and historic resources. Local artist Sara Muender did our first logo: a magnifying glass with five different symbols that could go inside it: a leaf symbolizing nature, a paw print for wildlife, a canoe for recreation, paint brushes and a musical note for culture, and a campfire symbolizing community. Eric Matz, then the school principal, became our first Board President.

That first summer of 1996, led by Jan Brewer from the school, we put on a very small handful of programs including our grand opening, the very first Discovery Day. I can't remember how many attended, but I know we came away thinking: wow! This really works. People loved the place and the ethic surrounding it.

By 1998, we were approved by the IRS as a 501(c)(3) nonprofit. With the help of donations and challenge grants from local folks and foundations, we hired our first Executive Director: Gary Milanowski. Those of us who worked as volunteers in the early days breathed a sigh of relief...and then another, deeper sigh as we realized there was so much more to do than Gary could possibly accomplish. Fundraising, finance, program, and buildings and grounds committees were populated by dedicated and talented volunteers. From the first, the Discovery Center was both nature center and community center. We worked hard but we had fun too: our first Board meetings featured pizza and beer. The last one of the summer was conducted on Bill and Marilyn Gabert’s pontoon boat.

The years flew by. Our staff and budget grew. We got our first computers, and Executive Director Rolf Ethun kept a sledge hammer next to them to keep them properly tuned. We pioneered truly creative and worthwhile programs like Bob Kovar’s Intercultural Leadership Initiative and Jim Bokern’s Digital Time Traveler. An early workshop built the beautiful and authentic birchbark canoe we still have today. We improved our ski, hike and bike trails, including our state of the art Interpretive trail. Gradually, we improved our main lodge, cabins and other facilities. Board President Dick Hemming swore he would not leave office until we had useable winter office space and restrooms, and so our mobile office building came to the site in 2006.

New faces brought new energy. The Social and Silent Auction on Memorial Weekend Sunday became the Big Event, and fundraising took a big jump. Our membership grew from a few hundred to a thousand. But most important were the continually innovating programs put on by staff like Tracy Janezcko, Zach Wilson, Bruce Greenhill and Licia Johnson. Zach’s Woods and Waters had Iron County kids doing important research on the endangered pine marten. Licia’s Traveling Naturalist took our show on the road. Bruce created Nibbles and Knowledge. All these programs continue today. When aquatic invasive species began to appear in our lakes, we formed an innovative partnership of the Town of Manitowish Waters, the Manitowish Waters Lakes Association, and the Discovery Center. Our aquatic and terrestrial invasives efforts have expanded to Winchester, Presque Isle, Boulder Junction and beyond.

Summer interns have been critical in expanding the Center’s ability to handle our growing audience, and we became known as one of the absolute best places in Wisconsin for a young person to gain hands-on experience with caring and professional mentors.

It wasn't always easy. There were a few tense Board meetings where we reached into our pockets in order to make payroll. We yearned for better year-round facilities, and yet they were always just a bit beyond our grasp.

Yet with every hardship, we gained strength. Sarah Johnson poured  boundless energy and determination into her position as executive director, bringing us to a place of unprecedented financial stability and programmatic excellence. And now John Heusinkveld leads us with both unparalleled passion and experience.

Along the way we have been blessed with so many incredible staff members, board members volunteers and donors. It is this community of support that is our foundation. Everything we do is built upon it.

So where have we come to today?

To a staff of eight plus seasonal staff and interns and a budget of more than $500,000 annually.

To an outdoor learning facility with far-reaching impact known for its creativity and excellence, serving kids and adults, residents, visitors, and organized groups and offering programming both onsite and to all the diverse ecosystems around us.

To an increasing focus on citizen science projects – the involvement of volunteers in collecting important scientific data. Bat monitoring and a cutting edge lake level monitoring program are just two of those important efforts.

To affiliations with our Bird Club and Friends of Van Vliet Hemlocks, and partnerships with local and regional organizations like the Manitowish Waters Historical Society, Fe University, Wisconsin’s Green Fire and many lakes associations.

To a permanent easement with the WI-DNR that has replaced our lease and gives us the right to use the property forever, as long as we continue to pursue our mission. We worked literally for years to make that happen. We consider it a testament to the trust and reputation the Discovery Center has earned from the WI-DNR and from the public.

And to a $3 million capital campaign to fulfill that 25-year dream of having truly outstanding year-round facilities in which to fulfill our mission of connecting people with the natural world.

25 years - where did they go? In the case of the Discovery Center, to a mission that will never grow old, an effort that will never end, and, hopefully, the energy and support of the community that will continue its success long after we old-timers are gone.

Please be sure to type where you would like your donation applied into the text box on the next page when making your donation. This ensures that your donation is applied to the correct fund.