What is the lake level monitoring program?
The Discovery Center, with the assistance of the UW Trout Lake Research Station in Boulder Junction, hosts the largest and longest running effort in Wisconsin to monitor lake water levels. The project has monitored about 40 lakes for over 7 years, creating a unique data set used by scientists to create predictive models.  UW Trout Lake and Wisconsin DNR scientists are using these data to predict effects of precipitation on lake levels, and to predict effects of changing lake levels on ground water flow.
Lake level monitoring must be a long-term, multi-year effort in order to accurately discern trends and patterns. Our efforts depend heavily on the riparian owners who monitor their lakes each week, and the specialized volunteers who assist with gauge installation and removal. The lake level monitoring project utilizes over 50 volunteers. 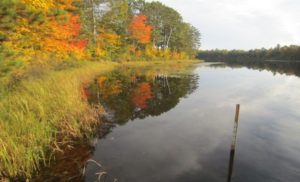 How does lake level monitoring work?
One-meter staff gauges are mounted on metal fence posts. They are installed into lakes in the spring after ice-off, and removed before ice-on on the fall. Using land survey techniques, specialized volunteers reference each staff gauge to a permanent, fixed benchmark on the shoreline. This allows for us to compare lake levels from year to year. Riparian owners read staff gauges each week to the nearest 0.5 centimeter. 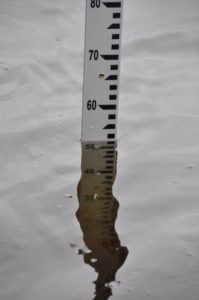 Close-up view of a lake gauge 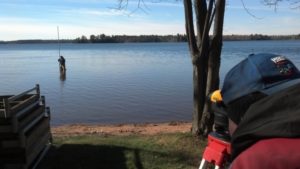 What are some ways the data have been used?
University of Wisconsin scientists published an article in 2014 indicating that “lakes in the upper Great Lakes region of North America have been dominated by a climatically drive, near decadal oscillation for at least 70 years.” The oscillations are consistent among small seepage lakes (meaning the lakes do not have incoming our outgoing rivers/streams), groundwater tables, and the two largest Great Lakes. These levels are all related to measures of precipitation.

Graph from Watras et al. 2014. The left axis, “Anomaly,” can be thought of as change in water levels, and the bottom axis is time in years. Note that the trend lines for two lakes (both in the Northern Highland region), and the local and regional ground water levels all display similar trends over time.

Graph from Watras et al. 2014 showing the changes in water levels over time for the Northern Highlands region, Lake Michigan-Huron, and Lake Superior. Note that while Lake Superior’s trend may be more subtle, all water bodies follow similar trends over time.

Is my lake monitored?
You might not even be aware your lake is part of our project! Take a look at the list below to see if your lake is being monitored. Contact our Water Program Coordinator if you are interested in seeing data from any of the lakes listed below.

All lakes are located in Vilas County, WI

Your Help Is Needed

Curly leaf pondweed has been found in the Manitowish Waters Chain. Please keep your eyes open and let us know if you see this aquatic invasive plant along your shorelines or docks. Additionally, please check your boats and props to prevent the spread!

Citizen AIS Lake Monitoring
Join a crew to search for suspicious-looking species (plant or animal). Keep your eyes peeled and report any sightings to us.

AIS of the Month