Where are ZM from and how did they get here?
ZM are native to the Caspian Sea in Europe. They came to North America as veligers through the ballast water of ships. Veligers are the larval form of ZM. They spread inland as veligers in recreational boats, and as adults stuck to equipment. Zebra mussels can remain out of water for up to two weeks. 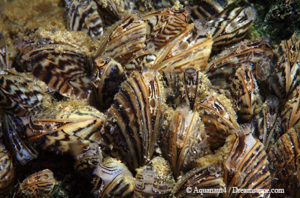 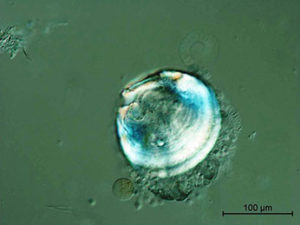 A tiny, invisible to the naked eye, zebra mussel veliger

How do I identify ZM?
ZM are small, fingernail-sized animals. The are 1/4-1/2 inch long, and are D-shaped with alternating brown stripes. 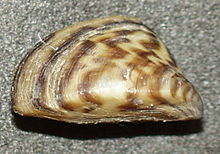 How do ZM affect Wisconsin water bodies?
ZM reproduce rapidly, with each female zebra mussel producing up to 500,000 eggs per year. They create deep mats on any hard surface within a lake, including on docks, in pipes, and around native mussels (ultimately smothering and killing the native mussel).
ZM are voracious filter feeders. They filter tiny food particles out of the water, which reduces food availability for other lake critters. 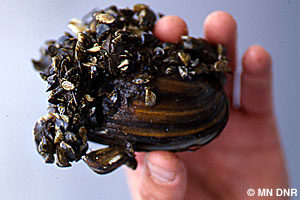 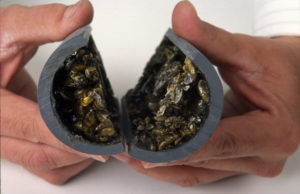 What can be done once ZM enter a water body?
The Minnesota DNR and partners have used pesticides to treat zebra mussels in several Minnesota lakes. Studies are still in progress to determine large-scale suitability of the pesticides.
Boaters and recreational lake uses are strongly encouraged to check their boats, trailers, docks, and other equipment before moving them away from lakes, and also to drain all water from boats before leaving the landings.

Lake Plants You Should Know- A Visual Field Guide. University of Wisconsin- Extension.

Aquatic Plants of the Upper Midwest- A Photographic Field Guide To Our Underwater Forests.Written by: Paul Skawinski.

Through the Looking Glass- A Field Guide to Aquatic Plants. Written by: Susan Borman, Robert Korth, and Jo Temte.

Saving Our Lakes and Streams. Written by: James A. Brakken.

Your Help Is Needed

Curly leaf pondweed has been found in the Manitowish Waters Chain. Please keep your eyes open and let us know if you see this aquatic invasive plant along your shorelines or docks. Additionally, please check your boats and props to prevent the spread!

Citizen AIS Lake Monitoring
Join a crew to search for suspicious-looking species (plant or animal). Keep your eyes peeled and report any sightings to us.

AIS of the Month